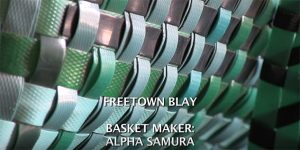 I recently returned from Freetown, Sierra Leone in West Africa where I was volunteering for a small NGO, WAYoutarts (Worldwide Arts for Youth) which provides free education in film, music production and creative writing. Its aim is to empower homeless, conflict affected and educationally disadvantaged street youth by giving them the means of creative expression to tell their own stories. 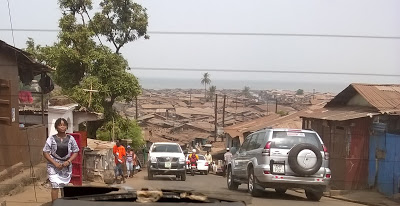 I certainly didn’t go with any intention of teaching basketry or getting involved with it in any other way. If anything, I’d gone to get away from it for a while and experience new horizons. I spent the first week giving one- to- one tutorials with the writers’ group, helping them with their biographies – painfully emotional reading at times but full of courage and determination.

But the director of WAYout had other ideas and before I arrived had sent one of the students to check out a local village where she knew they made baskets. Although Mohamad Conteh, my ‘fixer’ was keen to take me to the village having done all the homework, I could tell he wasn’t totally sold on the subject of basketry per se. Many of the young WAYout students are engaged in serious, investigative documentary filmmaking on such pressing issues as homelessness, female genital mutilation, disability and LGBTI rights and corruption. They also produce their own Hip-Hop/Reggae/Afro-Pop music as well as making promo videos for local musicians. Basketry? hmm, somehow just not quite their thing…

The small village of Fourmile is about two hours drive from Freetown and our best way of getting there was to charter a taxi. After a week I’d not only overcome my fear of Sierra Leonean transport, I’d even got used to riding in the back of texis without a seat belt. Luckily though, our taxi was relatively new and not only had a back seat belt, it even had a back window – although the front one was stuck together with gaffer tape. 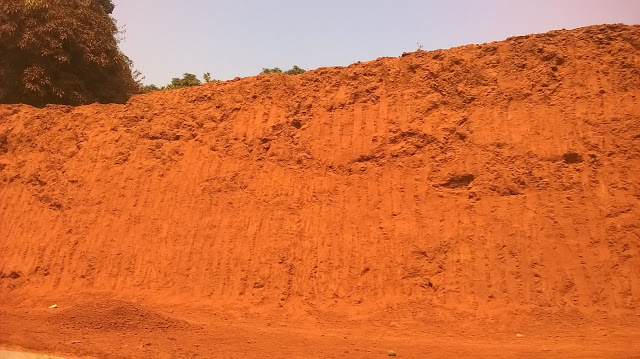 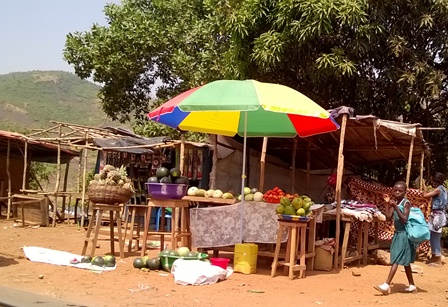 But there are plenty of road-side stalls where you can pull over for refreshment. Some even display their produce in woven baskets, although like everywhere else in the world these are rapidly being replaced by the ubiquitous plastic bowl. The tree in the background is a mango tree and if you’re lucky you can get a sweet, juicy mango for breakfast. 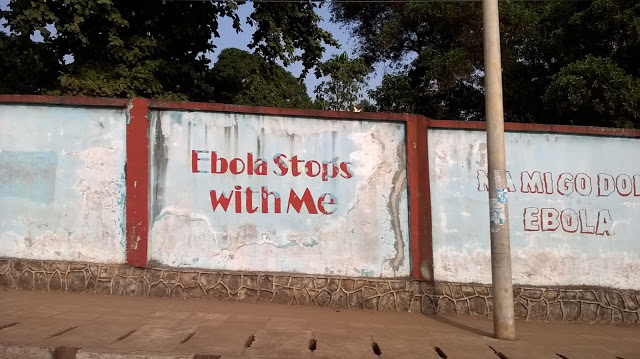 During the recent Ebola crisis the village became a curfew checkpoint beyond which no travellers could pass after 5pm each evening. this meant the villagers had a captive market for their wares and could supplement their livelihood by providing food and lodging for the night. Now they are once more dependant upon subsistence farming and the odd passer-by who stops to buy a basket from one of their road-side kiosks. 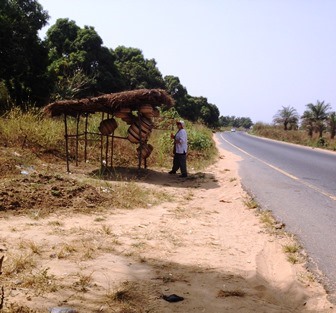 I was certainly an odd passer-by – very few foreign tourists, aid workers or NGO volunteers have yet returned to Sierra Leone after Ebola.

We arrived just after noon. Mohamad had checked that this was the time when the villagers returned from their morning work in the fields. I wasn’t quite sure what to expect as we stood by the roadside and Mohamad called his contact on the cellphone. At the very least I would buy a large basket for WAYout’s director. I would have loved to take one home myself but no space in my small suitcase. 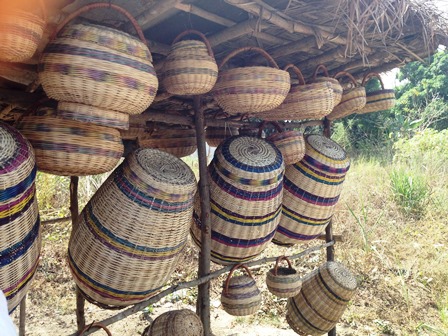 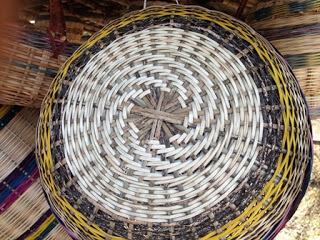 But soon several villagers appeared, including Mr Mohamad (Mr M) and Mr Joe who, it turned out, were the most experienced basket makers and they kindly agreed to show me how they make the beautiful spiralling weave that features on the base and lid of their baskets or ‘blay’ in the Krio language. 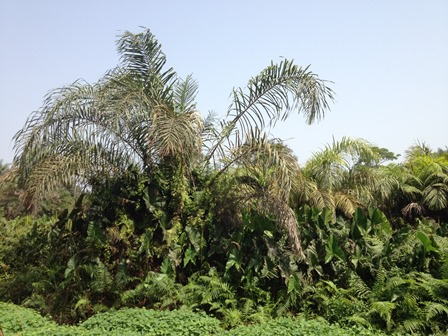 This first entailed a quick forage in the bush with a machete to collect materials. I chickened out at this point as the heat and humidity were getting to me – well that was my excuse, I was actually afraid there might be snakes! I waited in the shade while my more intrepid fixer followed Mr M with his camera to record the exact type of ‘plant’, the Krio word for basketry material, or what we would call ‘stuff’, was being collected. It’s a type of palm known locally as ‘pin-pin’ and it’s the 3 metre long, new, green stems that are used – between six and eight of them depending on the size of basket. 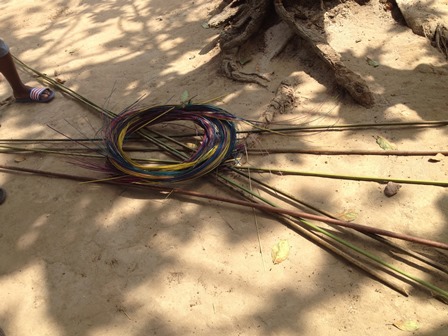 This fresh ‘plant’ is often combined with dried stuff that’s been coloured using commercial dyes bought from the market in Freetown. 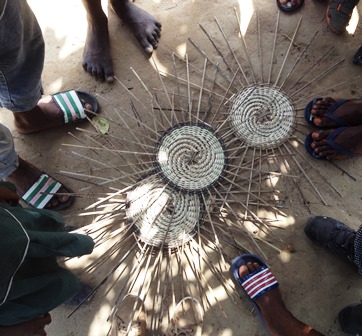 The spiralling bases are made underfoot, but before that can begin the ‘plant’ has to be split into different lengths. 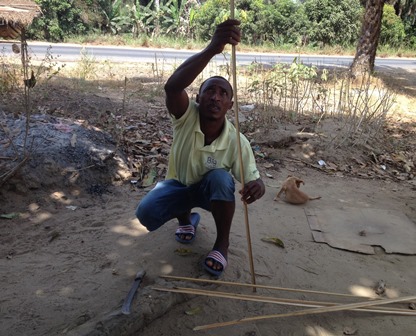 Mr M took a few stems of ‘pin-pin’ and began chopping them into approximately 1.25m lengths with his machete. These were further split into narrow widths to form the ‘bones’ or side stakes of the basket. Mr M explained that he’d need 33 bones for the base of a large basket and that these are always cut and used fresh. 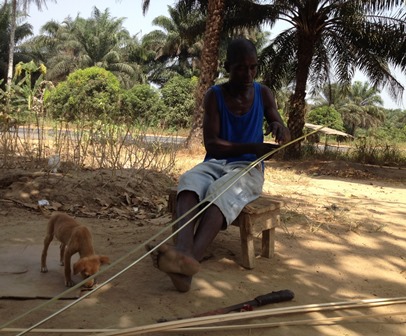 Meanwhile, Mr Joe split down several 3m long lengths into thin strips and then scraped out the pithy centre – carefully watched over by the village puppy. These would become the ‘plants’ or weavers – ‘Planting’ being the Krio word for basket weaving. 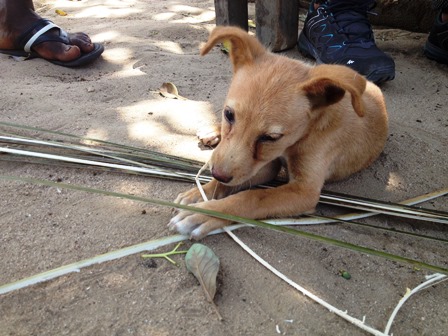 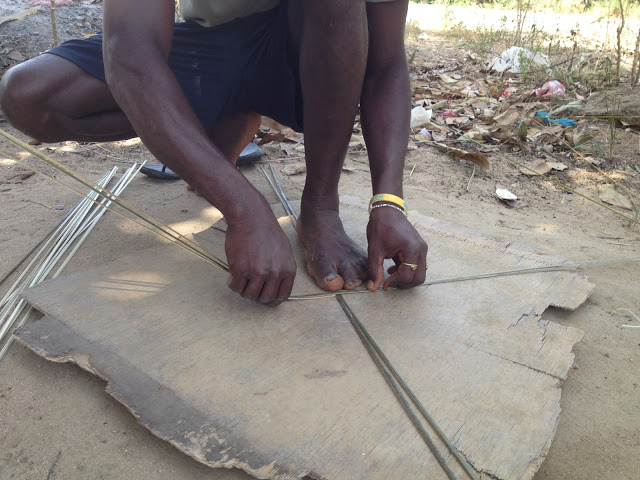 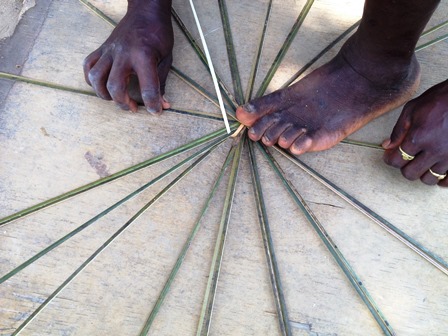 Once the bones were ready Mr M began arranging them into a star formation of 16 pairs and when they were all in place the first of the ‘plants’ could be added and the ‘planting’ began.

Then it was my turn. No pressure! I’d never made any type of underfoot base before and although the weave is fairly straightforward – over one pair under the next pair for the first two rounds – doing it bent double in 35C heat and 80% humidity was tough going. 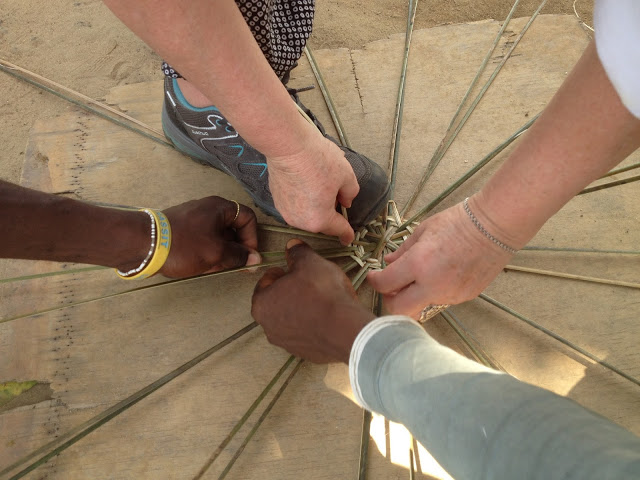 But there were plenty of helpful hands whenever I needed them. this way of starting is known in Krio as the ‘tope’. After the first two rows we had to add an extra bone to make an odd number, 33, since the tope uses a randing technique which doesn’t work with an even number. On the third row the doubles are opened out to singles whilst still working over two, under two – this creates a kind of ‘step-up’ progression which forms the spiral. 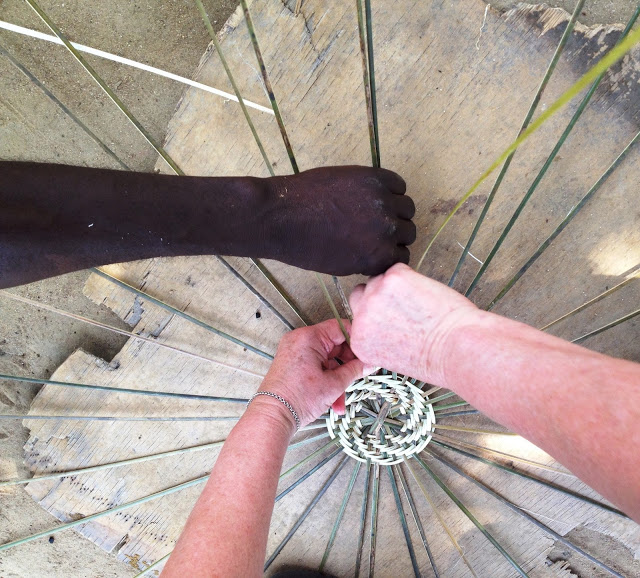 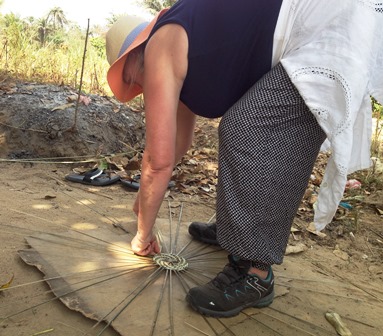 I realised too late that Mr M had kicked off his sandals when standing on the planting – out of respect for the work I assumed, whereas I was trampling all over it in my big boots! 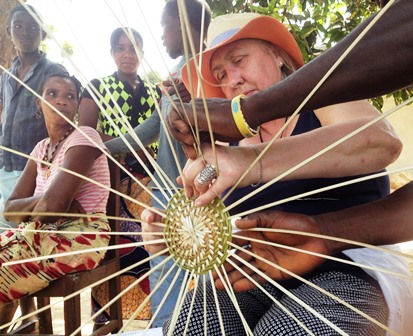 Before too long though, my back aching, my head dizzy and my eyes full of sweat, I had to give up on the underfoot method and sit down on the job. 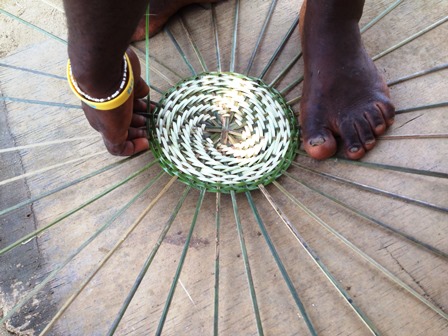 Normally one would continue working underfoot until the base measures approximately 20cms; at which point the pin-pin is twisted so that two rows can be worked with the bark side uppermost to give a decorative contrast marking the transition from base to sides. The green eventually dries to a subtly mottled grey-brown. Thankfully, Mr M took over at this point to demonstrate. 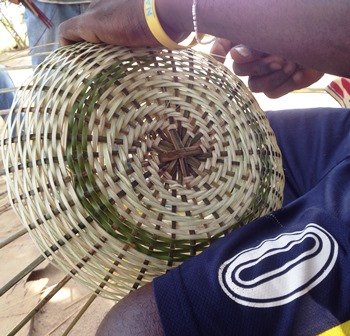 He then whizzed along with the side planting (randing) at an incredible speed whilst squeezing the basket gently between his knees to create the form. 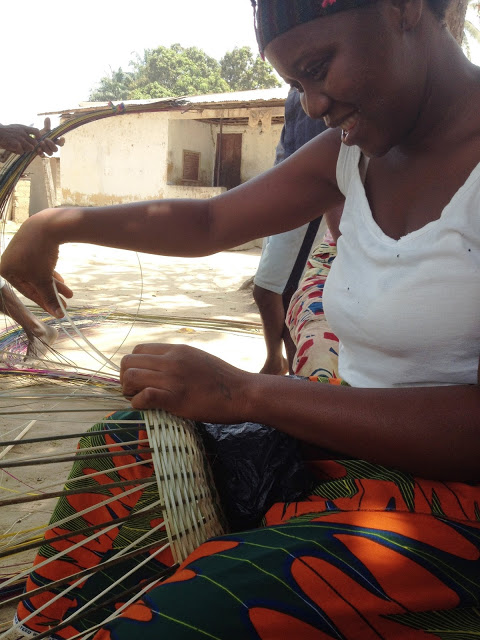 I was interested to know whether any of the baskets were made by women and someone went off to call Aminata, one of Mr M’s young trainees, who was happy to demonstrate her skills. Mr M told me that he began learning basket making when he was about eight years old. 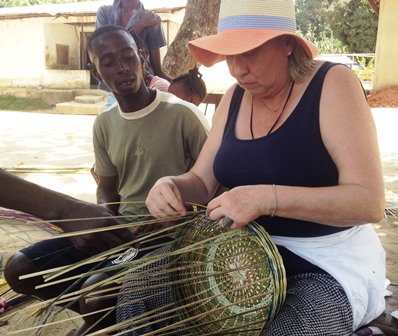 Then it was my turn again to add some colour and a change of techniques with a few rows of ‘tobra’ or 3-rod waling. I was on familiar ground here and for once could impress Mr M that I’d actually done it a few times before. 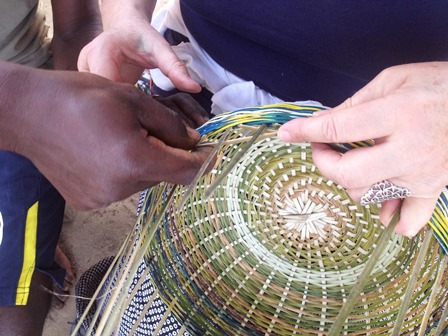 After the tobra the rim of the basket was finished with a simple one behind two pricked down trac border. 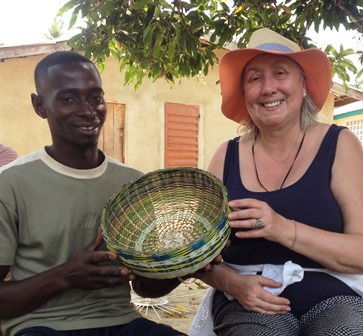 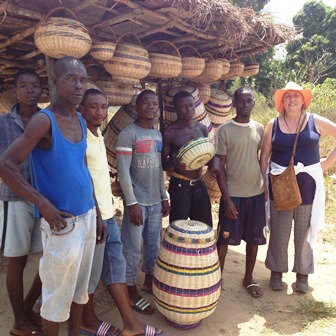 Before we left Mohamad and I chose a large basket to take back to WAYout. My small basket was little more than an oversized lid but I wouldn’t have swapped it for anything – and it fitted in my suitcase.

I am so grateful to Mr Mohamad, Mr Joe, to Henry and Hassan and all the villagers for their warm welcome and generosity of spirit in sharing their basketry skills. I realised that although Mohamad had been on hand to translate we had hardly needed words to communicate. Basketry is the common language that we shared. The materials and some of the techniques may have been unfamiliar but the meanings were the same. Basketry is a gift of weaving togetherness. 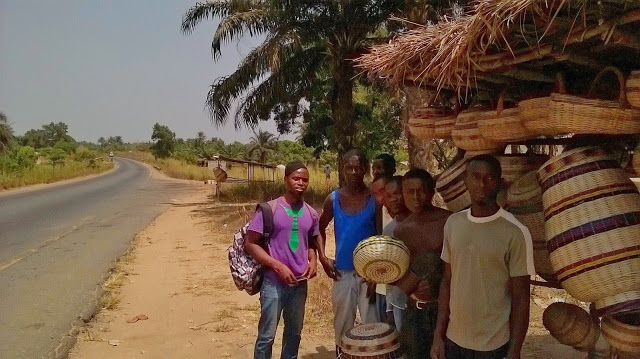 Huge thanks too to Mohamad (far left, green tie), the most excellent fixer and basketry photographer, who had begun the journey unsure about basketry and ended it full of enthusiasm to make a documentary about it one day. Job done!

If you would like to support the work of WAYout you can make a direct donation via the ‘support us’ page on their website www.wayoutarts.org